Saturday Morning Under the Shade Tree 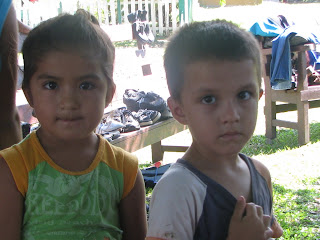 Up and at 'em early this morning. The yard was bustling with activity. The church was holding a yard sale at the same time that locals were arriving to gain access to the Kalachucha clinic , now housed in a former office of the church. Amanda entertained the local children with her bag of lollipops as I scoured the crowd for candidates for the day care. It was easy to collect several families in dire need of our assistance. The pair in this photo are a set of twins being raised by their grandmother, Diana and Christian. It seems by the grandmothers account that the mother died shortly after giving birth as what sounds like a bad case of post-partum depression led her to not eating. The father left shortly after the death of the mother. I ask for your continued support, thoughts, and prayers as we move forward to embrace those brought to us.Working together we can and will provide these children with what we have been blessed with and often take for granted.
Posted by Daisy's Children at 9:42 AM