Home Sweet home in a Land Far Away 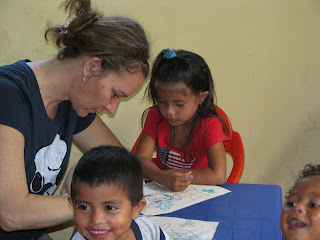 After a long 2 day journey filled with episodes of distress and fatigue, we were awakened by the myriad of roosters and dogs outside.Celebrations of laughter and tears followed as I entered the daycare for the first time since it became a reality. I felt like I was suspended somewhere between a dream and reality. I was quickly snapped back to reality with the first of a rush of hugs and little voices calling my name. The kindergarteners were already sitting at colorful tables eating breakfast in their new uniforms. The 'littles' were being showered and dressed in the bathroom. Many happy reunions. Not to mention stopping by the municipal office which led to an amazing afternoon filled with an amazing gift to the project. Now exhausted, head spinning, heart full- in need of rest. More tomorrow, I promise. Another incredible story.
Posted by Daisy's Children at 7:24 PM