Over the Mountain and Through the City

Last night was filled with several hours of sorting food from the AMIGOS buckets in order to prepare a week's menu. It has been decided that the 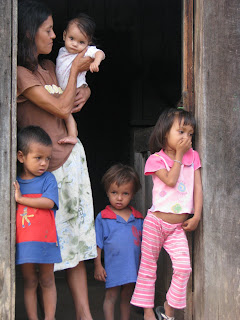 food will be distributed weekly due to the political climate. As a result of the turmoil the children have had 2 weeks off and returned to attend only Monday-Wednesday. A walk from the church to the house was very refreshing in the tropical rain. A sound sleep and an early morning breakfast led to the long ride to San Pedro Sula in order to complete our buying fruit, eggs, and making a trip to the pharmacy. I don't think this American will ever truly adapt to the road condition's effect on my digestive system , the extreme temperatures, or the range of odors one encounters; everything from the overwhelming sweet smell of some tropical blossom to the continuous burning of trash or animal waste. Medicine was bought for Karla, Deysi's younger daughter. We also bought large cans of Pediasure to supplement the dietary intake of the Torres children at left. All of the children are underweight with the physician's primary concern being that Naun is 34% underweight. Naun is standing between his mother and older sister, Lourdes. Naun is the young child I found sleeping in a pile of rags last August. It took all the strength I could muster to have an initial conversation with Trijidia without shedding tears. They came later as we drove away.These children will now each receive daily supplementation thanks to the fundraising efforts of our program known as Los Ninos de Deysi here. Naun, Carlos, and Gladys still wait for a sponsor to insure that such care continues. Each day as we walk ,my heart is heavy with the children in the streets who need our help desperately. When I ask for guidance, I am reassured that the hearts of those at home and abroad will soften to these stories and all will be well. A mere commitment from 44 individuals on the face of this entire planet will allow us to double the number of children who can receive these gifts of sustenance, opportunity, hope, and love. This is the prayer I say as I wake and go to sleep daily, especially as I walk the streets of this village, holding a hungry child's hand or listening to the voice of a child asking for my heart. Please share yours!

Posted by Daisy's Children at 3:22 PM