Nothing Is Easy in Honduras 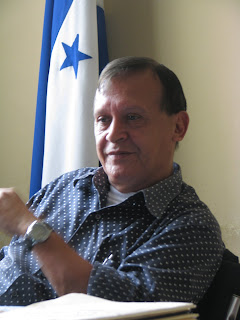 Yesterday was spent as another typical day of frustration trying to attain the release of the container. It takes an ENTIRE day just to travel, 3 hours to and 3 hours back, along with the 5 trips between the transport office and the port. In total we have spent 3 full days traveling back & forth, and the container is still being held in port. On top of that Maria Elena has spent 5 full days. Though Maria Elena says it is much easier for her than others. She said her Menonite friends also have a container that comes and it is the norm for it to take 3 months to jump through all the hoops to actually have it released. We left yesterday being told all was fine and that the truck would be here this morning. Lo and behold after several hours of phone calls back & forth, the paperwork was not in order and we were told the container will come tomorrow. This is a picture of the mayor. We met with him yesterday to have him arrange the municipal trucks for bringing the contents up the mountain as the road is nowhere near passable for a tractor trailer truck. He is very saddened by the government turmoil. He says the government is not sending him money for salaries. He also said his people are going hungry in the village because the tiendas/stores are not accepting anymore credit and noone here has any money. He is worried about how long it will continue. We have checked the embassy sight which hasn't been updated since the 8th. I am beginning to be able to translate most Spanish even on the television. Last nights report is that the curfew has been lifted. Also that Zelaya has been paying 400 people with government money, the problem being that none of them were actually working. Hmmmm........ though I remember that just like in the US the media feeds you what it wants you to believe. Off to Trinidad to obtain shelving for our food and donation bank. Oh- and by the way, you can buy a calculator for converting limpiras and dollars in Concepcion del Norte but you have to travel for 40 minutes to buy 2 AAA batteries! Count your blessings!