A long trip to San Pedro Sula with young Yester in tow. We brought 2 1/2 year old Yester to a pediatric specialist who ordered multiple tests to include bloodwork and urine and fecal samples. The doctor gave him multiple samples of enriched formula and vitamins. She has agreed to be the specialist for the children in our project. The reality that hit hard was that even though Yester has been receiving regular food and vitamins, he is still a year behind in height and weight. The doctor wanted to give him a week with several medications as well as the dietary supplements but felt that otherwise Yester should be hospitalized due to the severity of his malnutrition. My only hope is that our project reached him prior to irreprable damage. Between the office visit and a slew of difficult tests for Yester, a lunch was in order. Yester ate fish, tortillas, and chicken. As you can see he thought the chicken was finger licking good. So good that he demanded a bag to take the rest home for a late afternoon snack. I also gave up my soup with chicken and rice, knowing he certainly needed it more than me. We all had a great laugh when I told Yester that both bags were only for him. He actually clapped and had us all laughing. The reality struck later as we sat on the porch of our Honduran residence. The tears just came as I realized the gravity of Yester's situation. Conversation led to the harsh reality that without immediate and further medical intervention, a child like Yester could become one of the children of Honduras who never reaches the age of five. Look at that face and imagine....... How can we? Such a circumstance for our own is so far from our realm of thinking. I can't imagine the thoughts running through his mother, Mirna's, head and heart as the gravity of the situation and the directions for medicine administration hit home. As I breathe each and every breath, I will do my utmost to prevent Yester from becoming a tragic statistic. Only I can't, and neither can Yester or Mirna do it alone. Your help is URGENT. The funny thing is the life you save may be your own! 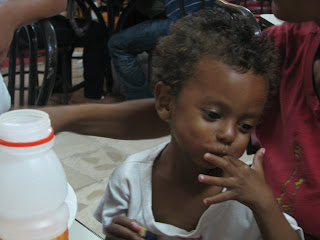 Posted by Daisy's Children at 8:38 PM