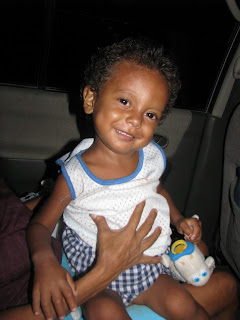 Thanks to one and all who kept Yester in your thoughts and prayers. As we prepared to drive to Santa Barbara to visit Yester, we actually met his father for the first time. He came looking for the Americanos and his son. He had been to Yester's home to no avail after returning from the hospital. Sadly, he was told Yester was released and wasn't there. When the Americans showed up at the hospital I was happy that my position as director of Daisy's Children and my Spanish readily opened the guarded gate. A quick walk to pediatrics found Yester sitting in a chair, his IV intact, munching on a bag of Doritos. Definitely not the same child we saw on Saturday. The doctor reported that he had a parasite infection. He was discharged in our care. A big smile and a kiss on the lips from Yester stole my heart and began our journey home. Follow up will continue. In the meantime our prayers were answered. Yester's already let us know he's looking forward to the next chicken. All in a days travel through the mountains. If we have questioned our journey at any point during our stay, all doubts were erased with a quick embrace and a small kiss that tasted like tangy Doritos!! P.S. Gladys became Yester's amigo. He fell asleep in his mom's arms in the car clinging to Gladys' leg :-)

Posted by Daisy's Children at 9:17 PM