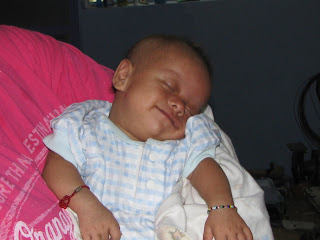 As we worked in near impossible heat painting walls, the sweat poured down our necks, backs,etc. Drinking water didn't seem to help. Voices could be heard in the front room. One was undeniably Maria Elena, praying, then singing. Curiosity gave me a good excuse to check out what was happening. Maria Elena was praying as a woman stood before her in tears with a very small bundle wrapped in a receiving blanket. The woman had come to the door for prayers. Her two teenage sons had been brutally removed from her home in the middle of the night by four men and killed. One was 16, the other 17. It had happened recently in Tela. She since has moved to Las Flores. I asked to hold the bundle as prayers continued. Opening the blanket revealed a 2 month old boy with obvious Downs Syndrome. As I was feeling weak and tired, another small one had been brought to our project. We conversed with the mom as little Mario continued to sleep. Mario Jose will have a loving place to be cared for, fed, and adored as his mother has the opportunity to work. Even at our weakest, there is always purpose and hope!
Posted by Daisy's Children at 3:50 PM